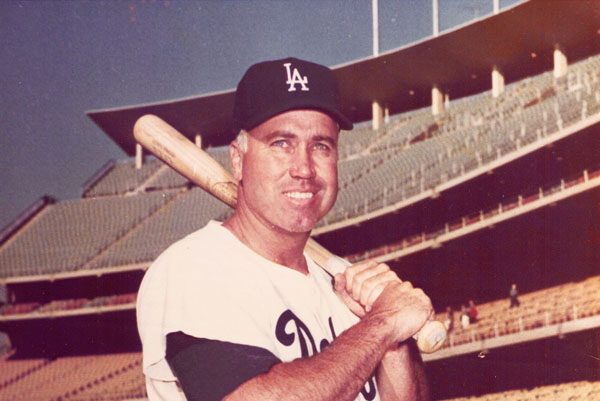 In any particular minute of any particular day, at least 225,000 references can be found on the internet about Baseball Hall of Fame player, Edwin Donald “Duke” Snider. All those wonderful stats record his love of the game carved out over serval decades, easily accessed with just a few taps of the keyboard. Collectible baseball cards, in-depth interviews in print, radio, or on television plus a gazillion statistical data sites pay tribute to his stellar career, primarily playing as a center fielder for the Brooklyn/Los Angeles Dodgers.

But before all of those stats, Duke’s life can be traced alongside America’s evolution through a timeline of stock market crashes, the depression, World War II, civil liberty unrest, and many other pivotal points. Born in southern California in 1926, he often credited his parents for giving him the tenets of character and integrity framed by their encouragement of education and athletics. Those values served him well and as many would say, created a humble man with more on his mind than simply playing in our country’s top sport of entertainment. His early years included basketball and football in addition to baseball, and enjoyment of these sports was likely a bright contrast to the news heard each day on the family radio at age ten, or a black and white television in his late teens.

He spent more than 19 years of his life playing professional baseball, becoming known as The Silver Fox and The Duke of Flatbush (the name Duke being given to him by his father at age 5). While reporting to the Montreal Royals right out of high school, he barely played a season when recruited into serving nearly two years with the Navy during WW2. Somewhere in all of his life commitments to that point, he still found time to meet his wife Beverly and to start a family.

Duke wrapped up his playing career in 1964, but by then Beverly and his four children had already moved to Fallbrook, California. Since he wasn’t the type to simply fade off into the proverbial sunset, Duke went on to become a first-rate scout for the Dodgers and then the San Diego Padres, eventually becoming a well-known local radio/TV sports broadcasting analyst and commentator. He even added avocado farmer and bowling alley owner to the list!

Throughout his life, Duke was always “giving back” to help others, but it was in the last season of his life that he became a great supporter of Fallbrook baseball and all athletics in the area in general. High school games, tournaments, fundraisers, event committee planning, 1:1 coaching sessions, all become important avenues for Duke to generously share his time, wisdom, and experience. Even today, long after his passing in 2011, fond stories continue to be told about things he did on his own, so often under-the-radar, to help young athletes whether it was taking carloads of kids to big games, going off on wonderful and unexpected excursions, or hosting birthday and student bowling parties at Duke Snider Lanes. He lent his gravitas, voice, gentlemanly ways, celebrity, and code of conduct to others, helping shape the future for others who would come after him.

It seems befitting for a person who had given back and promoted athleticism often on his mind that Legacy Endowment Community Foundation will now carry his torch forward in establishing the new Duke Snider Scholarship Fund. This fund will begin distributing scholarships in the fall of 2022 for approved applicants wishing to attend college from the Fallbrook, Bonsall or Mission Vista High Schools who need an extra measure of financial support to help reach their goals. Legacy Endowment Community Foundation is 100% dedicated to representing the interests of its donors as a safe and productive investment haven for making charitable contributions and scholarships available, even in challenging times.

Legacy Endowment President, Rachel Mason, noted, “we are exceptionally grateful to Pam and Darrell Chodola, Duke Snider’s daughter and son-in-law, for choosing Legacy Endowment Community Foundation to shepherd and grow the fund as a means to support and encourage those students who will follow in Duke’s footsteps, cleats and all.”

For more information about Legacy Endowment Community Foundation, contributing to this new fund and creating your own, please call 760-941-8646.

Our mission is to improve the quality of life in our communities by empowering individuals, families, businesses and our charitable partners to realize their philanthropic dreams now and for future generations.